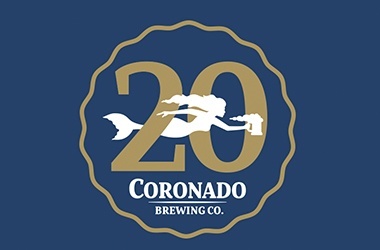 Coronado Brewing Company is celebrating 20 years of defining the West Coast craft beer movement. What began as a dream to open a brewpub on the idyllic island of Coronado, grew into something so much bigger than either of the Chapman brothers ever could have dreamed. “When we opened our doors in 1996, San Diego wasn’t yet known for craft beer. We wanted to create a family business where friends could enjoy quality beer and food in a laid back, beachy atmosphere,” said Rick Chapman, President and Cofounder of Coronado Brewing Co. “The company’s growth has far exceeded our expectations, and 20 years in, we’re just getting started.”

In addition to the commemorative beer, Coronado Brewing Co. is hosting an Anniversary bash at the main brewery and tasting room in San Diego. The party takes place on Saturday, July 30th from 4pm-9pm. $15 tickets include admission into the event, a keepsake glass, beer ticket, and entry into the raffle for Coronado gear. The event will feature 20 beers for 20 years, local music by CHUGBOAT, and several gourmet food trucks, including Seoul Man and BFD Sandwiches. Tickets and more information available here. Stay Coastal. Cheers.