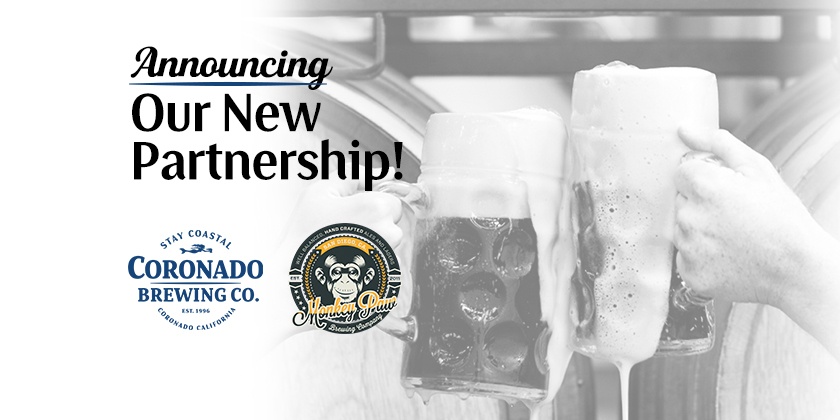 In today’s tumultuous beer climate, two of San Diego’s most respected and award-winning independent craft breweries are joining forces to deliver more beer to thirsty fans. Coronado Brewing Company will acquire a majority share in Monkey Paw Brewing Company. The move allows Monkey Paw to share in Coronado’s resources, further developing the brand, while simultaneously maintaining the independence, integrity, and quality that Monkey Paw has become known for. The acquisition is expected to close September 1, 2017, for an undisclosed amount.

“We are excited to bring Monkey Paw Brewing Company into our family,” says Brandon Richards, COO, Coronado Brewing Company. “We’re looking forward to partnering with Scot Blair and his team; they have built a tremendous brand from the ground up, and their beers are incredibly well-respected. We can’t wait to share their brand with an expanded audience.”

The partnership will enable Monkey Paw to bring more of its beer to fans throughout Coronado’s distribution footprint. The plan is to grow organically, with Coronado working with Monkey Paw to expand draft accounts, refresh its branding, and increase off-premise distribution. “Scot Blair has created a brand with a lot of momentum, and we don’t want to mess with that too much,” says Richards. “The pub will continue to operate as-is, and we’re looking at releasing new cans in the near future.”

The partnership is beneficial for both brands, and allows Blair to retain creative brewing freedom. “I feel unbelievably lucky to be able to lean on 21+ years of pioneering leadership to move Monkey Paw up, and into the future,” says Scot Blair, Founder & Brewer, Monkey Paw Brewing Company. “Coronado’s commitment to our brand is why this is such an exciting time for our team. Nick [our head brewer] and I will continue to develop our beers, brew the beers, and grow the brand in a way that keeps the integrity and quality of what folks have come to expect from Monkey Paw. The only difference is now we can scale our operation, utilizing all the experience and resources of CBC’s amazing family.”

Coronado’s move to acquire Monkey Paw comes at a time when many regional breweries are experiencing declining sales. “We have been looking for the opportunity to bring in a brand that fits with our culture, and doing so allows us to realize our operational efficiencies,” says Richards. “It also gives us the opportunity to sell more beer in California, which we love doing. We think this is a powerful extension of our brand and a great way to diversify our offerings.”

For more information about both companies, visit www.coronadobrewing.com and www.monkeypawbrewing.com. Stay Coastal. Cheers.

In 1996, when craft beer was still a foreign term and San Diego County was home to only a handful of breweries, the Chapman brothers, Ron and Rick, opened a brewpub in their hometown of Coronado. Today, Coronado Brewing Company stays true to its San Diego roots, brewing abundantly hoppy West Coast-style ales, which are currently distributed in 16 US states and 12 countries. In addition to the long-established pub in Coronado, the company opened a tasting room inside its San Diego production facility in 2013, and a tasting room and restaurant in Imperial Beach, California in 2014. Coronado Brewing Company was honored in 2014 with one of the brewing industry’s most prestigious awards—World Beer Cup Champion Brewery and Brewmaster for a Mid-Size Brewing Company. Stay Coastal. Cheers.

Established in 2011, Monkey Paw Brewing Company is the brainchild of craft beer maven, Scot Blair. Monkey Paw Brewing Company is proudly independent, and one of San Diego’s most award-winning craft breweries.  Since its inception, the Paw has brewed a wide variety of medal-winning beers, with its greatest honors coming by way of Gold and Silver at GABF and WBC, respectively. The original maker in Makers Quarter, Monkey Paw Brewing Company operates on a 10-barrel system in East Village, San Diego, and was the first brewery in the county to pioneer canning its beers, back in 2012.  So, whether it’s a trip back in time for a traditional old world ale, or jetting into the future with bleeding edge techniques and ingredients, its well-balanced, handcrafted ales and lagers are proof we’re not just monkeying around.