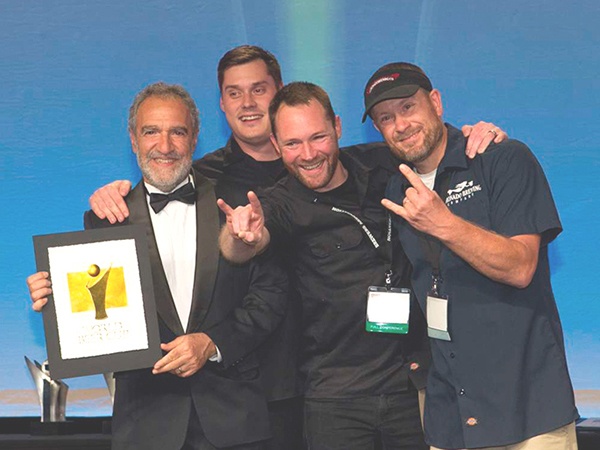 Coronado Brewing Company is crowned best in the world, with a Silver and Gold medal to boot

Coronado, CA, April 14, 2014 — For the next two years, Coronado Brewing will reign as the champion among all mid-size brewers in the world, having received the highly coveted Champion Brewery/Champion Brewmaster Award this past weekend, hosted by the Brewers Association. The awards were presented at the conclusion of Craft Brewers Conference & BrewExpo America® in Denver, CO and are arguably the most prestigious awards in craft brewing. The World Beer Cup is held biennially during the CBC and the World Beer Cup awards brewers worldwide for their achievements in brewing quality craft beer.

As the company gains more social media fans and its restaurant and tasting room are more packed than ever, Coronado Brewing also now has validation

from the brewing governing body of 219 judges from all over the world.  The Southern California brewer also walked away with a Gold medal for their Islander IPA and a Silver for Old Scallywag.

Presented with thousands of choices in the beer aisle and on beer taps, what this means to the average craft beer drinker is that any beer they choose from Coronado Brewing is brewed by the best in its class.  In fact, this year’s event was particularly competitive; the proportion of breweries winning one or more awards was only 18 percent, compared to 27 percent in 2012. There was a 75.6 percent increase in breweries competing this year versus 2012, which had 799 breweries that entered beers in the competition. A total of 253 breweries took home awards in 2014, a 16.6 percent increase over 2012.

“It is a huge honor to win one medal at World Beer Cup, so winning two and Champion Mid-size brewery is epic!” Said company president and Coronado native Rick Chapman. “It is a privilege to be recognized by the Brewers Association and to be in the company of previous multiple time winner Firestone Walker.”

Chapman’s brother Ron, company co-founder and CEO added; “I am very proud of our team of brewers.  Winning two medals and Champion Mid-size Brewery and Brewmaster is well deserved for Shawn Dewitt, our director of brewery operations as well as Ryan Brooks, our head brewer.”

A mid-size brewery is classified as one that brews 15,000 to 6mm barrels per year, and Coronado Brewing is targeting to brew around 30,000 in its two facilities in 2014.  Winners for the Champion Brewery Awards are determined based on the results of the competitive beer judging held at the World Beer Cup. Breweries are awarded points based on medals won, and these points are tabulated to arrive at the results, with criteria including most points, most gold medals, and more.

The panel of 219 judges from 31 countries worked in teams to conduct blind tasting evaluations of the beers and determine the awards. “Brewers from around the globe participate in the World Beer Cup to win recognition for their creativity and brewing skills,” said Charlie Papazian, president of the Brewers Association. “For a brewer, a World Beer Cup gold award allows them to say that their winning beer represents the best of that beer style in the world.”

Brewers from five continents earned awards from an elite international panel of judges at this tenth biennial competition, with brewers from 22 countries—ranging from Australia and Brazil to Taiwan and the United Kingdom—honored. Judges awarded 281 out of 282 total possible awards, reflecting the chance for one gold, one silver and one bronze award in each of 94 beer style categories.

Shawn DeWitt, co founder and director of brewery operations at Coronado Brewing had this to sum up; “Winning mid-size brewery of the year is validation for seventeen years of hard work and is great for all San Diego breweries.”

In 1996, when craft beer was still a foreign term and San Diego County was home to only a handful of breweries, the Chapman brothers Ron and Rick opened a brewpub in their hometown of Coronado. CBC brews abundantly hoppy West Coast-style ales staying true to their San Diego roots. They began distributing their beers throughout the local market, and today you can find Coronado beers in 13 states across the US. In addition to their long established pub in Coronado, the company opened a tasting room inside their newly built San Diego production facility in early 2013.