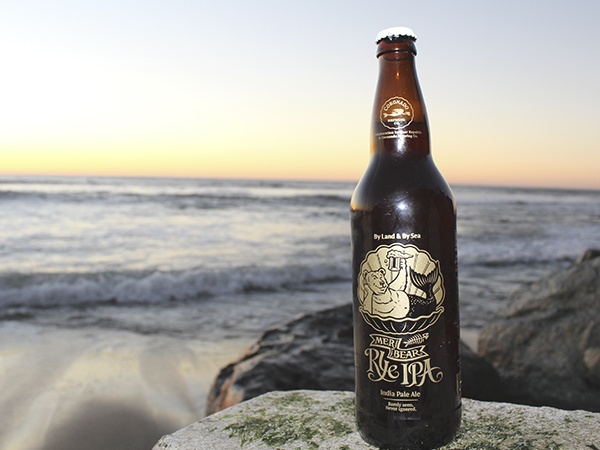 CORONADO, CA — February 12, 2016 — It’s half mermaid, half bear, and entirely fantastic. MerBear Rye IPA, the new love child of SoCal icon Coronado Brewing and NorCal heavyweight Bear Republic, is set to hit shelves mid-February. The friendship began a few years back when president Rick Chapman and Brewmaster and COO Richard “Ricardo” Norgrove, of Coronado and Bear Republic respectively, met for beers at a local San Diego beer bar where they discussed the idea of the two creating something special. Two years, and countless collaborative visits later, MerBear was born.

“We have always respected the team and loved drinking their beers,” said Brandon Richards, vice president of sales and marketing. “We’ve built a solid relationship with Bear Republic and enjoy working with each other any chance we get,” continued Richards. “This is something I can see developing into more collaborations in the future.”

“It was fun putting our heads together for the MerBear collaboration, and we look forward to seeing how the MerBear project evolves in the future,” said Bear Republic Head Brewer Rob Kent.

The Bear Republic and Coronado Brewing teams will be partnering up and hosting dual tap takeovers with the brewers on-site in search of the elusive MerBear. You will be able to meet the brewers and taste the two versions of MerBear side by side, By Land & By Sea.

We may even have a few special guests migrating down from NorCal for the event!

More details to come but guaranteed to be legendary events between the two brewers. Please visit https://coronadobrewing.com/MerBear for more details.

Additionally, Coronado Brewing will host a teddy bear drive at the company’s Bay Park Tasting Room. Starting February 12th, bring in any stuffed bear or animal and receive a free Coronado pint glass. Donations will go to a local kids charity, It’s All About the Kids Foundation.

Where to find MerBear:

About Coronado Brewing Company: In 1996, when craft beer was still a foreign term and San Diego County was home to only a handful of breweries, the Chapman brothers Ron and Rick opened a brewpub in their hometown of Coronado. CBC brews abundantly hoppy West Coast-style ales staying true to their San Diego roots. You can find Coronado beers in 19 states across the US and 15 countries. In addition to their long established pub in Coronado, the company opened a tasting room inside their newly built San Diego production facility in early 2013 and a new tasting room and restaurant in Imperial Beach, CA in 2014.  Winning 2014 Champion Mid Size Brewery and Brewmaster at World Beer Cup in Denver awarded them with one of the most prestigious distinctions in the industry.