Who: Coronado Brewing Company, based in Coronado, CA with an additional production facility in the Mission Beach area of San Diego, is a family owned brewery and restaurant that has signed a 25-­‐year lease in the space that was previously occupied by Jersey Boys Diner.

What: The IB space will be transformed into a brewery restaurant with a tasting room and 16 taps serving Coronado’s locally-­‐brewed beer. Year round favorites will include Orange Avenue Wit, Mermaid’s Red and Islander IPA, and there will also be rotating seasonals such as Crown Series favorites like Frogs Breath IPA and Stupid Stout. 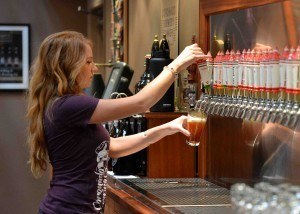 No onsite brewing will happen at the  Imperial Beach location as its 1,800 square foot size of the space is too small for brewing operations. The building will be completely remodeled, which is currently in progress (as of January 2014). Square footage will be added to the space as well as an outdoor patio. Fish tacos, burgers, pizza and many other coastal cuisine specialties will be served alongside locally crafted beer. The menu will feature core entrees that are consistent with the Coronado location. Specials on the IB menu will be different from the Coronado restaurant, however. The new restaurant will also be kid friendly.

While the company is owned and operated from Coronado, it is important to point out that the look and feel will be completely different than its other two facilities and will mirror the vibe of IB as the owners believe its important to keep the identity of Imperial Beach. An Imperial Beach beer will likely be brewed.

Why: Co-­‐founder of Coronado Brewing Ron Chapman lives a few blocks from the location. His familiarity with the area, and optimistic outlook that the area will soon thrive with new businesses bodes well for the future of the Seacoast Drive and Old Palm Avenue commercial district. He said: “There seems to be some momentum and I think the spirit in the city is really good.”